Introduction of the Honshu-Shikoku Bridge Project 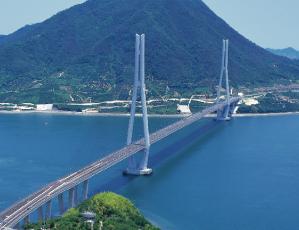 Tatara Bridge, with the center span of 890 m long, is the second longest span cable stayed bridge in the world.
Suspension bridge was planned at the first stage; however, the bridge type was reviewed considering the preservation of surrounding nature and economical condition of the work, against the background of the technical progress of cable stayed bridges.
The height of the tower is 226 m above the seawater level, and this is the highest point in the route.
Tatara Bridge formed a sister bridge alliance with Normandy Bridge in France which is the third longest cable stayed bridge in the world.