We are developing a method of managing fatigue of bridges accommodating both vehicular and rail traffic.

Long-span bridges such as the Seto-Ohashi Bridge which accommodate both vehicle and rail traffic were constructed with a large volume of quenched and tempered high tensile strength steel (SM570, HT690, HT780) which had been few applied at the time. However, there is a high stress ratio due to live loads on the suspension bridges’ stiffening girders, so because large loads of train cargo are repeatedly carried on them, research on fatigue on areas such as the weld joints of quenched and tempered high tensile strength steel, on which we had little knowledge, has progressed. In the design and fabrication of bridges such as the Seto-Ohashi Bridge, original design and fabrication standards taking into account fatigue based on this research were enacted and used in the bridges’ fabrication.

Freight train passing through the interior of a stiffening girder structure 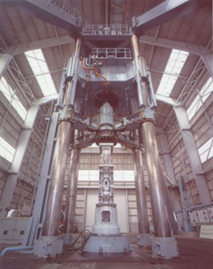 After the Seto-Ohashi Bridge was opened to traffic, using indexes such as the rank of cracks within tolerance that were confirmed at the time of the bridge's fabrication, steel material type, and stress ratio, we have been using management methods such as confirming the safety of the bridge through investigations of the progression of cracks using automatic ultrasonic flaw detection (AUT) and crack progression analysis using those results.

However, taking into account the fact that with the current rail load and number of trains the stress environment is mild, the progression of cracks must be mild, we have judged that management using investigation of the amount of progression of cracks using AUT only is less than ideal. In the future, we are aiming to build a management method of fatigue of bridges accommodating both vehicular and rail traffic by developing a different method for more accurate verification of fatigue and evaluation of cracks.