It is planned to further improve earthquake resistance of bridges over the sea.

The Honshu-Shikoku bridges over the sea were designed by original seismic code of HSBE. In the original seismic design code, although a plate boundary earthquake with magnitude of 8 (for the Akashi-Kaikyo bridge, magnitude of 8.5) was considered, an inland near field earthquake with magnitude of 7 was not considered. To improve seismic stability for large- scale plate boundary earthquakes as the Great Hanshin earthquake, and inland near field earthquakes as the Tounankai-Nankai Earthquake , which would occur in the near future, seismic performance verification and seismic retrofit design are conducted. And seismic technologies are developed.

In seismic performance evaluation and development of seismic retrofit technologies, it is important to reproduce precise behaviors of long-span bridges during earthquake and to analyze the characteristics. Therefore, the technologies developed are as follows;

Modeling and analyzing the long- span bridges with long-term period

Long-span bridges above the sea as cable suspension bridges and cable-styed bridges consist of characteristic structures which are not adopted in other bridges. In analysis, it is important to model these structures precisely. For the members of the long-span bridges,which consist of many smaller menbers, such as truss girders, seismic analysis methods that can reproduce dynamic behaviors of the actual bridges are being studied. 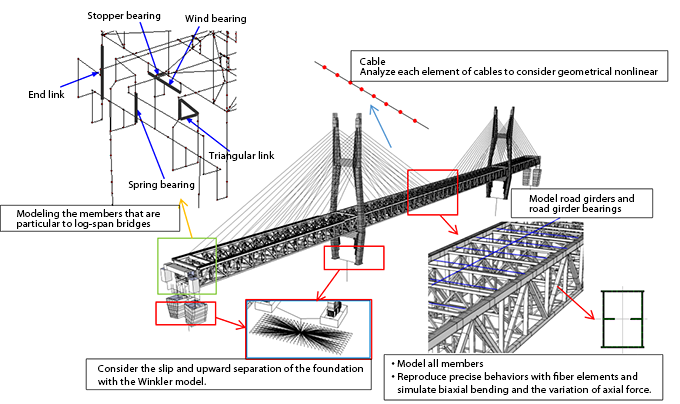 Seismic performance evaluation considering the transmission of damage to other members. 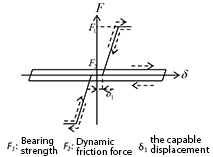 To conduct the seismic retrofit design reasonably, the evaluation of the results of the time-history response analysis is necessary. When it is difficult to evaluate the results, the degree of damage of members is evaluated in detail with the methods such as FEM analysis. And the need and range to retrofit is determined.

(3) Compare the analysis result with fiber model with that with FEM shell element. 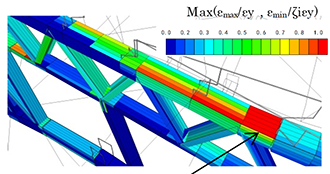 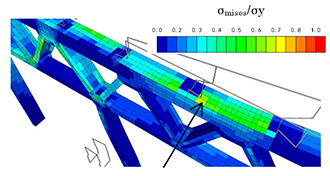 >Evaluate the need to retrofit in total consideration of the serviceablity after earthquakes and the change of the response due to the difference between models.

Application of seismic retrofit technologies such as isolation and damping

For the seismic retrofit, the application of isolation and damping rather than reinforcement of members is sometimes reasonable, economical, and earthquake resistance is improved. As an example, the isolation of truss girder of the Hitsuishijima Viaduct in the Seto-Chuo Expressway is introduced.

The Seto-Ohashi Bridges are highway-railway combined bridges and rail lines are in the truss girders. The retrofit of the members support overhead lines is virtually impossible in reality by the limitation of the train scheduling. Therefore, alternative retrofit design was considered. As the result of the seismic performance verification of the truss portion of the Hitsuishijima Viaduct, it is found that the total number of damaged members is large. As a result of consideration of retrofit methods, the isolation of the entire bridge was selected. This was the first recorded case of railway bridges in Japan. The seismic retrofit designs were considered from the perspective of structural stability, workability, economy, and so on. The latest knowledge such as a constraining effect of long rail line continuous the adjacent bridge, was incorporated in the design. 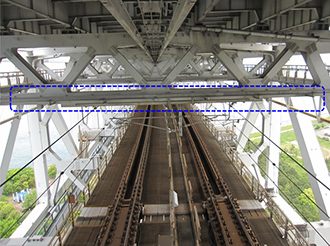 The isolation of the highway-railway combined bridge (the truss portion of the Hitsuishijima Viaduct), the first recorded case in Japan.