We are working on developing an effective and efficient method of repairing orthotropic steel deck fatigue cracks.

Compared to concrete decks, orthotropic steel decks can be erected with lighter volume and less time, and another characteristic is the high amount of flexibility they afford in the design process. Therefore, this is a deck style used in many places such as urban expressways where there are many constraints to the erection process or in long-span bridges such as the Akashi-Kaikyo Bridge.

In recent years, numerous fatigue crack of various types have been found, mainly in heavy-traffic routes, and we have also confirmed the existence of the same kinds of cracks in the steel decks of the Honshu-Shikoku Bridge Expressway. Up until now, methods of repairing cracks such as doing work on the upper surface of the deck plates after removing the pavement and re-welding have been used. For example, in the method of doing work on the upper surface, on long-span bridges over straits where there is no alternative route, or urban expressways which are routes with heavy traffic, there is a large social impact due to traffic control such as road closures; also, with re-welding, although there is no need for traffic control, the concern of cracks re-occurring is a problematic topic. For these reasons, we have been wishing to develop an effective and efficient repair method technology. 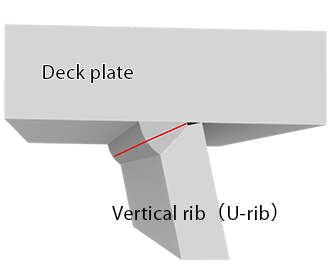 The HSBE (Honshu-Shikoku Bridge Expressway Company) has been working jointly with Kansai University to develop a repair method that is effective and also can be done from the lower surface of the deck plate only. Specifically, this is a method of transmitting strength by screwing or bolting down a covering plate in place of joining the deck plate and U-rib by welding. The characteristics of this method of work are that Thread Rolling Screws (TRS)* are used to join the deck plate and the covering plate; drilling and fastening the TRS causes no damage to the pavement , and it is possible to carry out the work from the lower side of the deck plate only.

Along with composing a manual for use during repair work, we are working jointly with the Higashi Osaka Bridge Maintenance Committee (name at that time) to develop tools to support the repair work, such as a device to drill into the deck plate in a way that does not damage the pavement and a jig to ensure that TRS screws are driven in at a 90-degree angle. Also, we have confirmed that this repair method is sufficiently effective via fatigue testing on a steel deck specimen on which this repair method was done.

Currently, we are carrying out construction tests on several cracks on an actual bridge by the repair method we have developed, and confirming the repair's durability, etc. Also, together with Kansai University, we have applied jointly for a patent on the repair method that was developed.

*Thread Rolling Screw (TRS): a screw that is capable of cutting female threads into the wall of the bolt hole while it is being screwed in. In cases like this one, after boring into the deck plate through the bolt hole of the covering plate, it is simply possible to drive in TRSs. Moreover, TRS can be driven using a store-bought impact wrench.

After repair (before painting)