「A promise for two, on the birthplace of Japan…」

There's a fantastic light performance using the Chikkoseki Rock, in the area next to the Lover's Sanctuary.

The Chikkoseki Rock Monument was created based on the mythology of Awaji Island being the birthplace of the country of Japan.

According to the Record of Ancient Matters (Kojiki) and Nihon Shoki, the oldest chronicles of Japan, a couple of divine beings known as Izanagi-no-mikoto and Izanami-no-mikoto, descended down to the floating heaven bridge (Ama-no-Ukihashi) from Heaven to create the land. They churned the ocean with a "heavenly spear" (Ama-no-Nuboko), and upon raising the spear, salty water dripped from the spear and coagulated, forming one island - Awaji Island. The two gods then descended down to this island, and created the nation by forming a marriage pact between themselves.

In addition to the illuminated view of the Akashi-Kaikyo Bridge, seen from the Lover's Sanctuary in the Awaji Service Area at the end of this heavenly island, a light performance by the Chikkoseki Rock is also available, created from the concept of the promise made between the two beings here on the land where Japan found its beginnings. We hope that, just like the mythology, this will become a location where the two of you can confirm your love for each other. 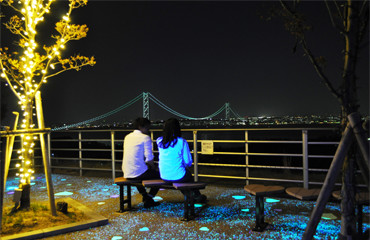 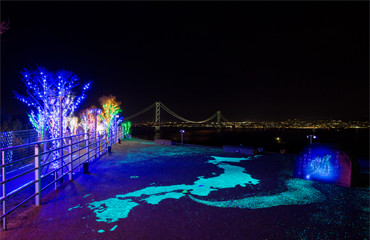 Officially titled "phosphorescent ceramics," this ceramic material (artificial stone) absorbs ultraviolet rays from sunlight and fluorescent lights during the day and semi-permanently goes through a cycle of accumulating and emitting light.

In addition, it does not contain any radioactive or toxic substances, so it is also a product that is friendly to the global environment. 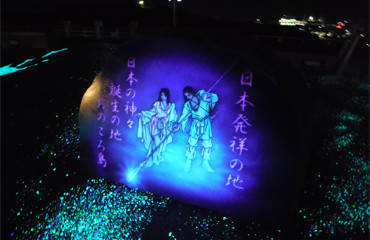 「An Illuminated Scenic View in the Seto Inland, With Both the Glitter of the Ocean and the Sparkle of the Sky」

Lover's Sanctuary, the "Heart Light Gate" that is the symbol of the Awaji Service Area, is in a location for a wonderful view overlooking the Seto Inland area. In the daytime, it soaks in the sunlight creating a heart shower, and at night you can enjoy a sparking night view of the illumination of the Akashi-Kaikyo Bridge as well as the illumination of the promenade.

Sitting on the bench next to the Heart Light Gate, a marriage proposal set against the backdrop of the world's longest Akashi-Kaikyo Bridge would be very stylish! 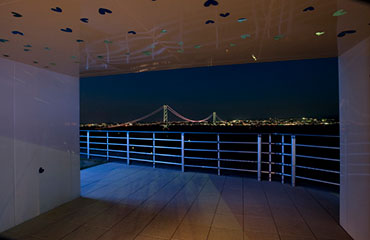 The first Sunday of every month is「"Day of Kobe Proposal"」

On the first Sunday of every month, for 1 minute between 7:59 and 8 PM, the lights are turned off, giving the couple an intimate moment together.

We started this photo gallery in order to introduce everyone to the Lover's Sanctuary and Awaji Service Area. We took various pictures at the "Heart Light Gate" which is the symbol of the Lover's Sanctuary of the Awaji Service Area Inbound - soak in the light of the daytime sun for a heart shower, and with the gate lit-up together with the Akashi-Kaikyo Bridge in the nighttime. We hope you enjoy it.

What is the Lover's Sanctuary?

The NPO Area Activation Supporting Center (Shizuoka City) has established the "Lover's Sanctuary" project in order to revitalize the region and as countermeasures to the falling birthrate, centered in the tourist facilities and regions that are representative of each region.

For the selection, in order to maintain fairness, a Lover's Sanctuary Selection Committee composed of prominent figures in each field has been set up within the corporation. (140 locations as of December 2016)